Robert Mitchell—who is also one of the contributors to our project “Musical Life of the Late Middle Ages in the Austrian Region”—had recently informed Reinhard Strohm and myself of a new concordance he had identified on a musical fragment from Kutná Hora (Kuttenberg) in the Czech Republic (currently without signature). This, among other fragments, was found at the Czech Museum of Silver by Štěpán Kafka who had made a depiction of one of the pages available on his website www.cantica.kh.cz. Josef Kremla from the Czech Museum of Silver in Kutná Hora kindly provided us with high-resolution images of the fragments and granted us permission for the reproduction in our “Musical Life” project. We would like to thank the contributors for their permissions to publish their findings on our blog site.

The “Kuttenberg-Fragment” consists of three folios which seem to have once belonged to a large-format choir-book. Four of the six pages contain the musical notation of textless, polyphonic pieces, probably written shortly after 1500. The folio which has musical notation on both sides (fol. C) features on its recto side the end of a tenor and bassus line of a three-part composition, while its front has the beginning of a cantus and bassus part of another one. Both fragmented compositions are yet unidentified. We would like to send out a call for assistance to the musicological community to identify the content of this folio. Depictions of the two pages can be viewed on “Marc’s Milk Carton“. (Check out the link to view the fragment. We would be very grateful for any help in identifying those yet unattributed works.)

The two remaining folios form an opening of the original manuscript (fols. Av-Br) and feature an almost complete prima pars of Alexander Agricola’s famous textless composition “Cecus non judicat de coloribus”. Fol. Av gives the cantus and the beginning of the contratenor bassus, fol. Br has the tenor line and the second half of the bassus voice. The same layout also seems to have been employed for the other surviving folio C, described above:

Principle layout of the Kuttenberg-Fragments with 10 staves per page.

Unfortunately, the fragment does not give a title for any of the pieces. Fol. Cr does not provide an incipit or a title because it does not contain a cantus voice where an incipit would have to be expected. Fol. Cv—even though it has the beginning of a cantus line (or at least the beginning of a form part of a cantus line)—even leaves out the initials: So, no help there, either. The incipit or title for “Cecus” may once have stood under the now missing first line of the cantus voice on fol. Av. The following reproduction shows the remainders of fol. Av and Br, which together form an opening of the manuscript with the prima pars of Agricola’s “Cecus”:

Kuttenberg-Fragment (fol. Av-Br): Prima pars of “Cecus non judicat de coloribus” by Alexander Agricola (identified by Robert Mitchell, reproduction with kind permission of the ©Czech Museum of Silver, Kutná Hora) – The scribbles in the margin of fol. Av amongst other things record the purchase of a horse (information from Štěpán Kafka).

The music of the prima pars of “Cecus” is almost identical to the versions surviving in the other great sources such as the Segovia manuscript. Curiously, the entire far side of this bifolio (Ar & Bv) only has empty musical staves. One would have expected at least the verso side of the second folio to contain the beginning of the secunda pars of “Cecus”.

Furthermore, Kafka and Kremla informed us of a watermark in the paper of folios A and C which they identified as Piccard 126608. This would place the manufacture of the paper to Augsburg in 1474. 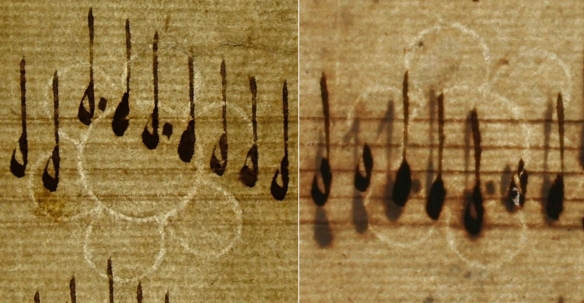 Fol. Av contains some scribbles written upside down into the margin of the page. Since, according to their shape, the regional archive director of Kutná Hora, Vojtěch Vaněk, dates these to c.1500, this would mean that they were added only shortly after the music had been notated. Štěpán Kafka informs us that the scribbles are accounts of mining horses in Kutná Hora and surrounding villages written in Czech. This would place the fragments at their present location at least from about 1500 onwards. The notes also give the names of the villages where these animals were from as well as the vendor’s name and the price. There are also some other “business notes”, which were not yet successfully deciphered.

The provenance of the fragment remains unknown for the time being: They were deposited with other loose leaves in an unlabelled box at the Czech Museum of Silver (Kutná Hora).

PS: Incidentally, a new recording of “Cecus non judicat de coloribus” can be found on the latest recording by my Ensemble Leones (“Colours in the Dark – The Instrumental Music of Alexander Agricola”, published 2013 with label Christophorus). 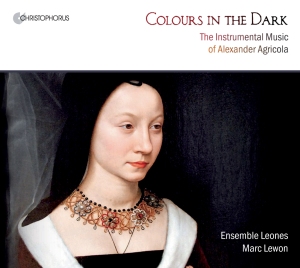